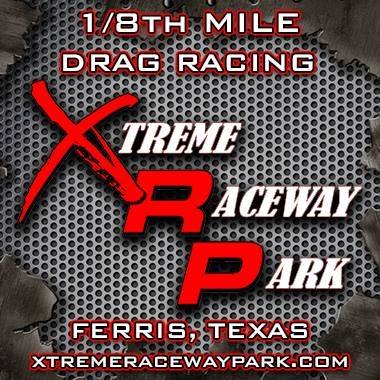 Many tracks have come and gone throughout the United States over the years and this has not been any different for the DFW area. Texas Raceway in Kennedale, Texas was a favorite for fans and racers alike for many, many years as was Green Valley, Dallas Raceway, and Redline Raceway. For one reason or the other, these tracks fell on hard times either economically or were pushed out by property development.

In the planning stages of Xtreme Raceway Park, these were all things that were taken into consideration. What had to be accomplished was to build a drag strip in an area that would become industrial before it became residential; this lead to the search for a property with freeway frontage and with the recent developments on IH-45 with the rail-port and supporting businesses, Trumbull, Texas was just the place.

The other key part of the puzzle was to be able to operate knowing what racers and fans wanted to see in such a facility. Xtreme Raceway Park is owned and operated by fellow drag racers and the checklist for what fans and racers wanted to see included clean restrooms, good food, reasonable concession pricing, family-friendly environment, good racing surface and convenient access. We have kept this all-in mind during the design and build process.

XRP was supposed to be a 2-year build but that schedule was pushed into overdrive with the closure of Texas Raceway which left many fans and racers without a place to go. A normal schedule to build from ground zero would be 18-24 months and we have achieved this in well under a year. This could have been done much quicker but there were additions along the way to add value to our fans and racers. These include “Bull Pens” which are raised platform covered viewing areas behind the starting line, a 40 x 40 covered pavilion with picnic tables and large commercial fans and coverings above concession areas with large commercial fans to keep you cool during the Texas summer, plus many more things.

We know that without the support of racers and fans that the track will not be a success, so your input was heavily considered during construction. You may think your Facebook comments went unnoticed, but they were not.

It is our goal at XRP to provide an environment that will be enjoyable to all age groups, class of racers and fans. We hope you have a great time when visiting our facility.

There are no comments to display.